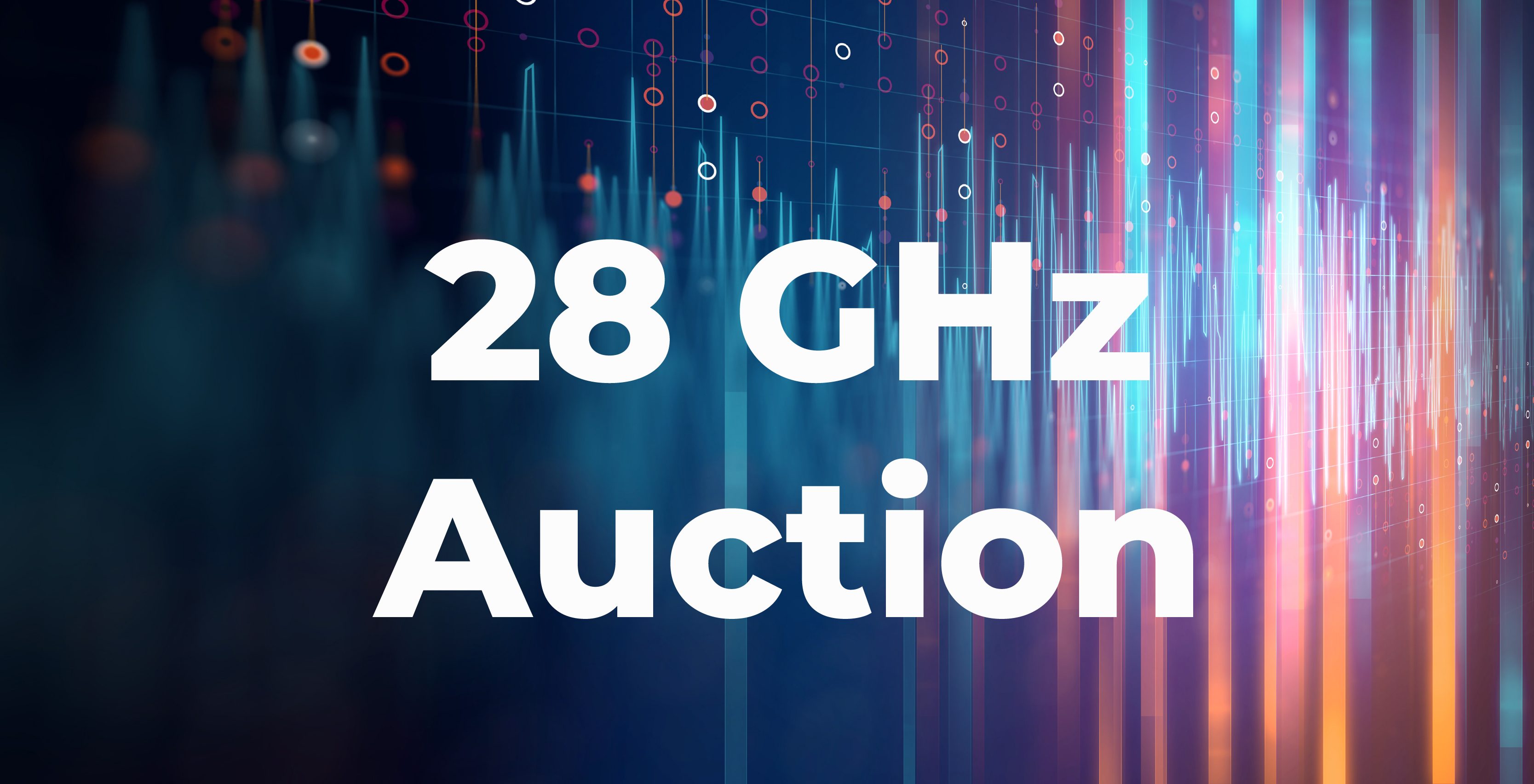 The ongoing FCC Auction 101 is for two blocks of spectrum in the 28 GHz band. You can see the general information about the auction here: https://www.fcc.gov/auction/101/factsheet#loff

They are auctioning off over 3,000 licenses - each license is about the size of a county.

Each block of spectrum being auctioned is 425 MHz wide. These are unpaired blocks – let’s talk about that. ‘Unpaired’ means that there isn’t one band for uplink communications (from device to small cell) and another band for downlink (from small cell to device). Instead, the same frequency is used for both uplink and downlink. So how do you separate uplink and downlink traffic? By leveraging time slots. Technically, we call this Time Division Duplex or TDD. Most of the spectrum bands used for cellular here in the U.S. are Frequency Division Duplex or FDD, meaning they have one block for uplink and another for downlink. The FCC calls these bands paired bands, and they must be bid on as a pair. Since the 28 GHz blocks are unpaired and will be used in TDD mode, a bidder only needs to win one 425 MHz block to provide service in the geographic area that the license covers.

Now, compare these 425 MHz blocks (unpaired) to the up to 20 MHz blocks of spectrum (paired bands, so 40 MHz together) that wireless operators are currently using for 4G LTE.

425 MHz is huge! This highlights why millimeter wave or mmWave spectrum is so popular – it offers these enormous swaths of spectrum. The larger the block the operator uses for 5G, the higher the capacity and peak speeds they can achieve. In this case, we are talking about a 10x increase!

The FCC 28 GHz Dashboard (https://auctiondata.fcc.gov/public/projects/auction101) gives you up-to-the-minute information on how the auction is going. By clicking on Round Summary (on the left under Summary), you can see the momentum is already slowing with only around 5% change or less in the total bid amount since Round 28 on November 29. Total bids are over $500 million. The FCC can choose to move the auction to the next stage, where bidders must commit more of their money to help speed up the process – but it’s not clear when or even if that may happen. The auction continues until there is a round where no one bids for any of the 3,000 licenses. So even though momentum is slowing, this auction could still go on for a while.

From the 28 GHz Dashboard, you can also see the Provisional Winning Bids (on the left side of the screen under Bids). Clicking on the Bid Amount table header sorts the bids by dollar amount. Sorting from high to low lets us see that that Honolulu is the license with the highest bid (over $10 million for each block). We can conclude from this that most major markets (think New York, Los Angeles, Chicago, San Francisco, Philadelphia, Boston, Dallas, etc. - Honolulu is approximately number 42) are not included in this auction, making this auction a little less important than one that would include those large markets.

Why is 28 GHz spectrum not being made available in more locations? Well, Verizon already owns over half of the spectrum! Remember their Straight Path purchase for $3.1 billion that finalized early this year? And their $1.8 billion purchase from XO in 2017?

Who else already owns 28 GHz spectrum? T-Mobile has some 28 GHz spectrum in a few markets. Others have a little 28 GHz spectrum here and there as well. The FCC only has about 25% of the spectrum – that’s what’s up for auction in Auction 101. You can learn more in this FierceWireless article about spectrum ownership (scroll way down to the GHz spectrum section): https://www.fiercewireless.com/wireless/25-charts-spectrum-ownership-united-states

The more interesting auction will be Auction 102. Here is the FCC Fact Website: https://www.fcc.gov/auction/102/factsheet#loff

As for Auction 101, we will not know who bid for licenses until the auction is complete. And since the auction ends when no one bids for any more licenses in a round, there is no definitive end date. Will Verizon shore up their already extensive ownership in this band? Will T-Mobile add to their 28 GHz holding? Will there be a surprise strong bidder? Which rural carriers will win licenses in their regions? We’ll find out all these answers once the auction is complete. Stay tuned!

Mark enjoys helping leaders keep pace with the industry and understand the power of digital technologies to transform their business. Some of his areas of expertise include Machine Learning, Virtual and Augmented Reality, 4G LTE, 5G, network virtualization (NFV/SDN) and radio spectrum. When he is not defining or delivering innovate learning solutions, he enjoys time with his family and following professional soccer around the world.