Getting your G's and N's Right by Hooman Razani 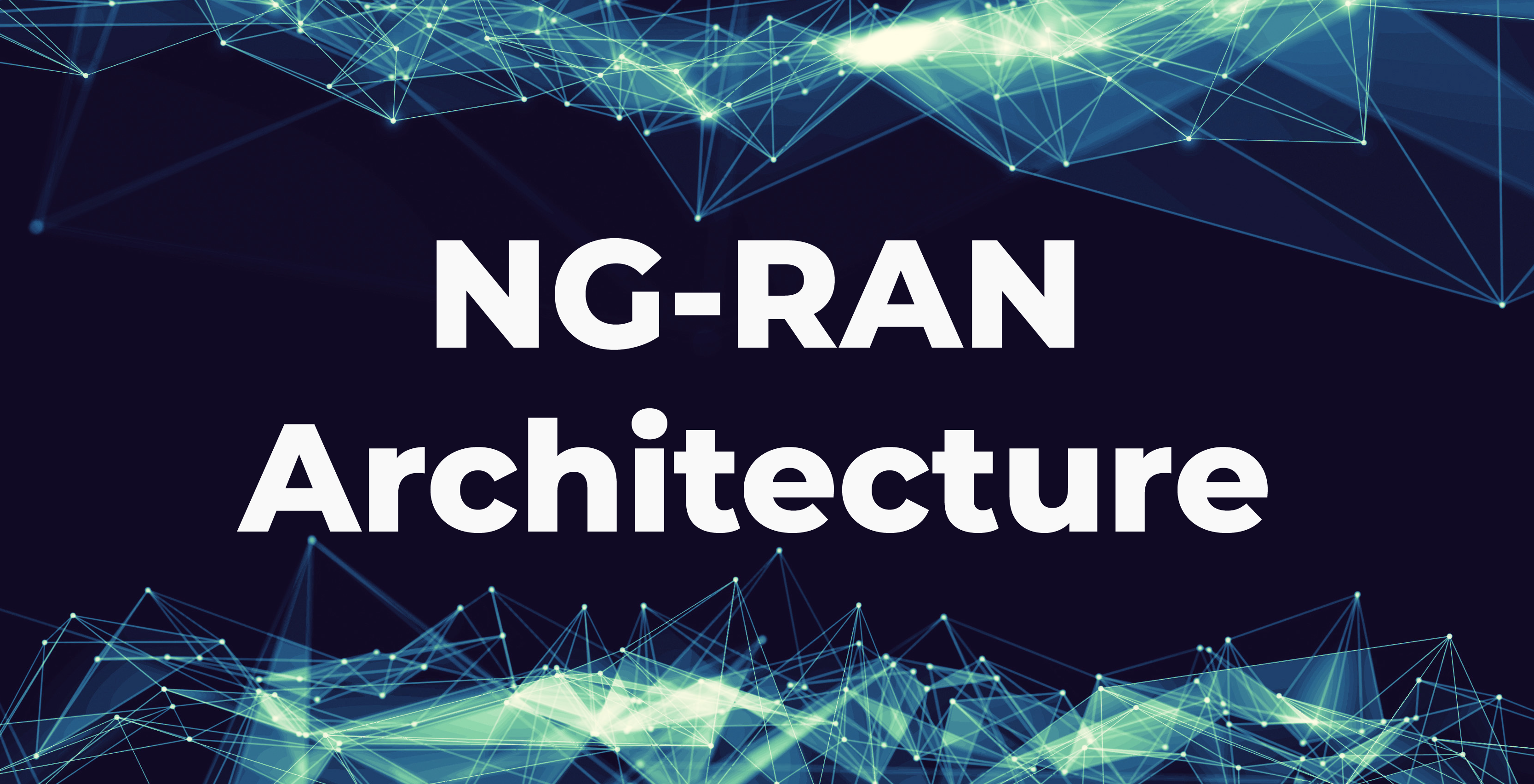 Our cellular industry loves acronyms (my favorite: OTDOA-IPDL). We are perhaps only rivaled by the military’s use of these cryptic letter combinations. In your studies of 5G Radio Access nodes, you will quickly come across the following:

Associated with the last one (en-gNB) are the concepts of MeNB, SgNB, and EN-DC. Let us clarify these acronyms.

The gNB is the logical 5G radio node, the equivalent of what was called NodeB in 3G-UMTS and eNodeB or eNB (i.e., evolved Node B) in 4G-LTE, is now called gNB. What does the “g” stand for? It has been (incorrectly!) suggested that it may stand for “gigabit-NodeB” but the real answer can be found in the minutes of RAN3#92* meeting from 2016:

– various proposals, no agreement at first.

And, so it was agreed to call it gNB. In gNB, the letter “g” stands for next generation. The term nNB was deemed confusing and ngNB was not desirable as only a single letter in front of NB was required. In summary, the gNB handles radio communications with the 5G capable UE using the 5G NR (New Radio) air interface. The gNB in its most basic form connects to the 5G Core network through the NG reference points although some types of gNBs may connect to the 4G EPC instead of 5G Core .

Let us turn to the ng-eNB. The 5G NG-RAN (next generation radio access technology network) can have either a gNB or an ng-eNB as nodes (here ng stands for “next-generation”). The ng-eNB is essentially an enhanced 4G eNodeB that connects to the 5C Core network via the NG interfaces but still uses 4G LTE air interface s to communicate with the 5G UE. So, both the basic gNB and ng-eNB use the new NG interfaces toward the 5G Core but use different radio interfaces towards the UE. The gNB and ng-eNB are linked together via the Xn interface. The diagram in below illustrates these concepts. 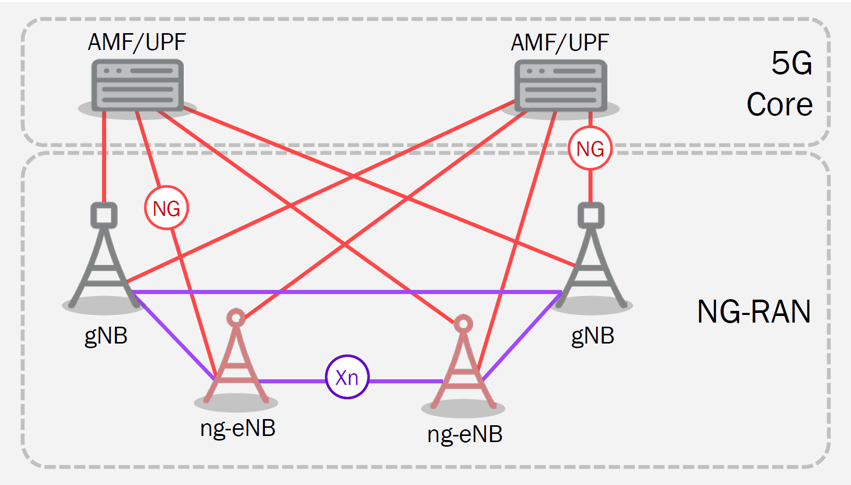 But what is the motivation for introducing the ng-eNB? We anticipate that the huge investments in the existing 4G radio network infrastructure are going to be used long after the commercial launch of the 5G networks. The ng-eNB concept makes use of existing 4G radio network, allowing it to coexist with the gNBs. For example, a 5G UE can make use of both LTE radio resources and 5G radio resources when it has both LTE and 5G radio coverage. Additionally, in a given geographic area, LTE radio coverage provided by ng-eNBs but no 5G radio coverage. Hence, ng-eNBs can serve 5G UEs in such areas.

We finally turn to the en-gNB. This 5G-RAN node is not mentioned in the overall description of 5G network architecture in the 3GPP Technical Specification 38.300 V15.1.0 (2018-03), so where does it fit in? The answer has to do with EN-DC or E-UTRA New Radio Dual Connectivity option for rapid deployment of 5G for current operators of 4G LTE networks. In this scenario, the 5G gNB connects to the 4G Core network. More specifically, the 4G eNB acts as a master node (MeNB) that is in control of the radio connection with the UE and the en-gNB is used as a Secondary Node (SgNB). In this architecture we can provide very high bitrates to the UEs that support dual-connectivity without too much impact on the core infrastructure. A good analogy would be the deployment of small cells (think secondary millimeter wave cells) to enhance the capacity of a macro cell (think master eNodeB), where the UEs can be communication with both cells simultaneously (Dual-Connectivity). Note that the en-gNB and the eNB can communicate through the X2 interface. The diagram in below shows the Dual-Connectivity option: 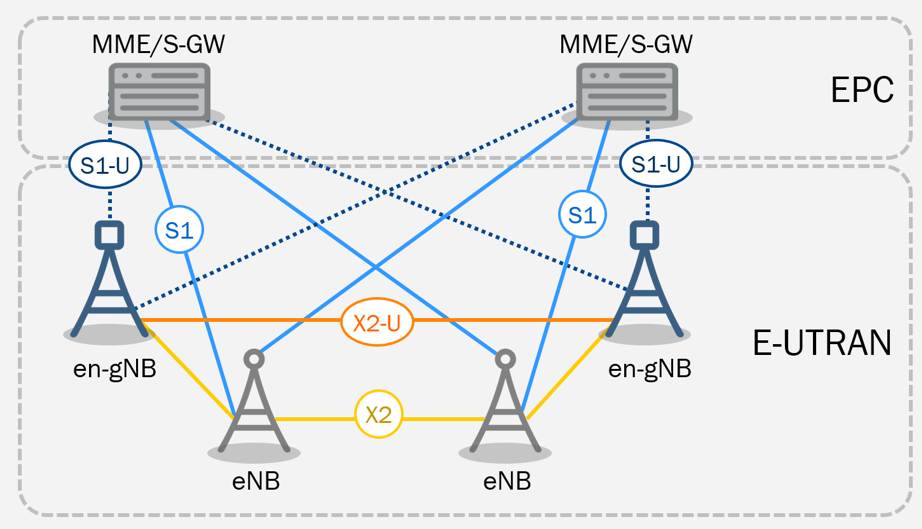 Hooman Razani is a senior consultant who joined Award Solutions in 2004 and has over 14 years of industry experience in the area of technology training and consulting and in the field of advanced wireless data communication systems. Hooman’s expertise spans LTE radio network, Evolved Packet Core (EPC), Policy and Charging Control (PCC) and IP Multimedia Subsystem (IMS), Self-Organizing Networks (SON) and Voice over LTE (VoLTE).

Hello, I am so delighted I located your blog, I really located you by mistake, while I was watching on google for something else, Anyways I am here now and would just like to say thank for a tremendous post and an all round entertaining website. Please do keep up the great work.

Thanks a lot for summarising it all....